The history of the USA Dry Pea & Lentil Council, Inc. (USADPLC) stretches back to 1949 when the dry pea processors in Washington and Idaho formed the Pacific Northwest Dry Pea Processors Association to enhance trade within the industry. 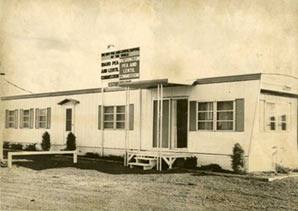 In the early 1960s, a small group of farmers in eastern Washington and northern Idaho formed the Idaho and Washington Pea and Lentil Growers Association and began discussing the need to fund market development, research and educational programming. The growers decided to pursue a levy on every pound of dry peas, lentils and chickpeas sold in the commercial market. The state legislatures in Idaho and Washington approved the establishment of the Idaho Pea & Lentil Commission and the Washington Dry Pea & Lentil Commission July 1, 1965. The ID/WA commissions and grower association hired Harold Blain to serve as their joint administrator. They established an office (a small trailer) on the state line between Moscow, Idaho and Pullman, Washington.

Recognizing the need to pool their financial resources to meet the growing needs of the industry, the Pacific Northwest Dry Pea Processors Association moved its office from Spokane, Washington, in 1969 to the state line office. A year later in 1970, the USADPLC was formed, bringing together the WA and ID pea and lentil growers and the processors and exporters association into one national organization charged with managing the research, marketing and government affairs programming of the dry pea, lentil and chickpea industry in the United States. Harold Blain served as the executive director of the USADPLC and the dry pea and lentil industry for 29 years until his retirement January 1, 1995. Tim D. McGreevy came to the helm and is the current executive director of the USADPLC.

According to NPR, here are the top food staples people to stock their pantry shelves.  Read this March 16th article from their Coronavirus Crisis special series.

Bon Appetit: 86 Ways to Use Up All Those Beans

If you have a bunch of pulses in your pantry and need some ideas about how to put them to use, check out Bon Appetit’s 86 Ways to Use Up All Those Beans.

NYT: A Boom Time for the Bean Industry

Beans, dry peas, lentils, and chickpeas - aka "pulses" are flying off the shelves as consumers brace for the worst - an extended quarantine due to the coronavirus pandemic.  According to a NY Times article published Sunday, March 22nd, 2020, Americans are filling their pantries with long-lasting essentials, and pulses are high on the list.  Read the rest of the article here.

February 10, 2019, will be the first-ever World Pulses Day, a designated United Nations global event to celebrate pulses worldwide and continue the important gains made with the 2016 International Year of Pulses.