Dry peas, like their lentil cousins, have been around for thousands of years. The earliest evidence dates from Neolithic times in Syria, Turkey, and Jordan. Present day finds were made in Thailand that date from 11,000 years ago. Discoveries have also been made in Egypt and what is today Georgia, Pakistan, Afghanistan, and India. Cultivated peas have been classified into two types: (1) garden peas (Pisum sativum ssp. hortense), which are identified by the wrinkled nature of their seed and cotyledon, and (2) field peas (Pisum sativum ssp. arvense), also known as dry peas and are distinguished by its smooth seed surface (Allen and Allen, 1981). The two types are genetically different and produce starches with different granular morphologies and characteristics such as rapid and higher starch accumulation and a lower sugar content of smooth seed types compared to wrinkled seed (Rubatzky and Yamaguchi, 1983).

As an annual herbaceous plant, the dry pea can be indeterminate (i.e., climbing) or determinate (i.e., bush or dwarf) (Rubatzky and Yamaguchi, 1983). One has normal leaves and a vine length of 3 to 6 feet. The other is semi-leafless with modified pale green leaflets reduced to tendrils resulting in shorter vine lengths of 2 to 4 feet. They usually have a single stem, but can branch from nodes below the first flower.

Depending on the variety, dry peas start flowering after a specific number of nodes (i.e., part of the plant stem that bears a leaf) are reached. Flowers are usually white, except for Austrian Winter Peas, which are reddish purple, with flowering occurring normally 2 to 4 weeks after germination depending on the variety and weather (Rubatzky and Yamaguchi, 1983). Flowering continues until drought or nitrogen deficiency brings it to an end. Dry pea varieties are distinguished by determinate or indeterminate flowering. The pods of the dry pea are about 3 inches long and contain 4 to 9 seeds, which can have a green, yellow, or cream colored seed coat. By the time some pea varieties reach maturity, the plant becomes a prostrate vine.

Peas are a cool season crop with planting taking place from winter through early summer depending on location. Although the planting is typically done in the spring, planting can occur in the fall and early winter where frost is not an issue. The seeds may be planted as soon as the soil temperature reaches 50 ° Fahrenheit (10 ° Celsius), with the plants growing best at temperatures of 55 to 65 ° Fahrenheit (13 to 18 ° Celsius). Pea seedlings can withstand considerable frost exposure without damage. If damage does occur and the main shoot is killed, new shoots will originate from nodes below the soil surface. Dry peas also prefer slightly acidic, well-drained soils. Once planted, it takes dry peas about 60 days to bloom and 100 days to mature the dry seed. Because high temperature during blossoming results in reduced seed set, production of dry peas as a summer annual in the United States is limited to the northern states.

The moisture requirement for the dry peas is similar to that of cereal grains. Ideal moisture includes good rains and/or early irrigation, and no rain during pod fill and ripening. Dry peas can be grown in a wide range of soil types, from light sandy loams to heavy clays. But in each case, there must be good drainage as dry peas do not tolerate soggy or water-soaked conditions.

Dry peas grow best when planted into a seedbed with a minimum amount of residue on the soil surface. Good soil contact with the seed is also important; therefore, seedbeds that are firm and well worked tend to be favored. Such features of the soil environment can impact the percentage of seedlings that emerge. Seed and soilborne pathogens may have a major effect on emergence.

Another factor is the pea seed germination rate, which increases as the temperature increases. But if temperatures reach 64 ° Fahrenheit (18 ° Celsius) or higher, the percentage of germinating seeds decreases. Temperature is also critical during flowering. Being a cool season crop, dry peas cannot tolerate hot weather or drought stress during this period, which makes seeding early very important. Unless erosion is an issue, fall plowing is recommended as a good way to help enable early spring planting.

Among harvested seeds, color variability within a particular variety is usually related to the seed’s maturity and the storage conditions. If irregular pigmentation is evident in a given lot of seeds from a single-stage harvest, it may be due to the differing ripeness of the seeds. 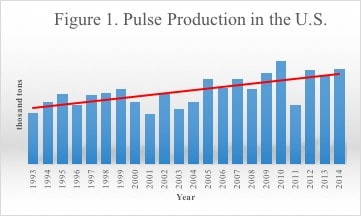 Use of dry peas traditional use

Dry peas can be hydrated by soaking and either canned or frozen, then served as a vegetable. Applications for canned or frozen peas include stir-fry dishes, pot pies, salads, and casseroles. Dry peas may be put through a splitting process and the split peas are then used in the popular North American dish, split pea soup.

In many Asian countries, whole peas are roasted, salted, and consumed as snacks. In parts of the Mediterranean, they are added to meat and potatoes to make a hearty stew. Dry yellow split peas are used in the UK to make the traditional Pease pudding or porridge, while dried, rehydrated, and mashed marrowfat peas, known in England as “mushy peas,” are a common accompaniment to fish and chips and meat pie.

In keeping with the increasingly popular use of vegetable proteins as functional ingredients in the food industry, dry peas have been proven especially useful due to their wide acceptance as part of the human diet. Starch and fiber fractionated from peas are also gaining its popularity for the same reason. Fractionation has been employed traditionally in many Asian countries to produce noodles using starch; however, utilization of protein which has been sold as a feed, has been implemented. More information about pulse fractionation and applications is discussed in Chapter 5 and 7.