Seeding rates for chickpeas tend to provide three (Kabuli) to four (Desi) plants per square foot to help promote adequate seed size at harvest. Seeding depth is about 1 inch below moisture for Desi and up to 2 inches below moisture for Kabuli chickpeas, though Kabulis can be planted down to 4 inches to use available soil moisture for germination.

The chickpea has deeper taproots than peas and lentils, giving it more drought tolerance. Chickpea resistance to early or late frost is similar to that of peas and lentils, with chickpeas offering a higher temperature tolerance during flowering than peas. Plant height of the Kabuli ranges from 14 inches to 22 inches and from 10 inches to 20 inches with Desi types. Kabuli chickpeas generally mature two weeks after Desi types.

Seed color is the most significant factor in determining a chickpea crop’s marketability as dark or discolored seed coats may make them unacceptable to food processors. Decisions such as harvest timing and methods have the greatest impact on developing seeds with the light yellowish cream color preferred by the market.

It is also important that the small protruding beak-like structure that distinguishes chickpeas must not be damaged during harvesting. Chickpeas can be harvested at 18 percent moisture and stored at 14 percent seed moisture.

Chickpea plants are distinguished by stiff stems and generally upright growth, with pods developing several inches above ground. There is a threat of pod loss if there is a break in the small stem that attaches the pod to the plant. Pod shattering, on the other hand, is not as common as in some other legumes.

Chickpeas are usually straight-cut but can be swathed ahead of the combine if straight cut equipment is not available. To reduce pod loss, swathing is generally done when the plants are slightly damp. Wind is also a factor as it can damage swaths.

Since green, immature seeds can result in chickpeas being downgraded and their value impacted, producers prefer to harvest when the majority of the crop is mature. This can require the field to be harvested in stages, leaving immature areas to a later date.

Producers normally harvest when the seeds are at approximately 18 percent moisture. Care must be taken not to damage the seed, especially the large Kabuli types. Due to their different seed coats, Kabuli and Desi chickpeas are handled in a slightly different way.

The recommended crop rotation for chickpeas is once every four years, mostly because of the aggressive nature of ascochyta blight, one of the major diseases for the chickpea. A once-in-four-year rotation will allow for the breakdown of chickpea residue on which the disease thrives.

World chickpea production is roughly three times that of lentils. Among pulse crops marketed as human food, world chickpea consumption is second only to dry beans. The major chickpea exporters include Turkey, Australia, Syria, Mexico, Argentina and Canada. About 90 percent of the crop, mostly of the Desi type, is consumed in India.

In the U.S., Kabuli chickpeas are most commonly sold as canned garbanzo beans for use in salads. They are also marketed in a dry form and used in ground flour for baking. If used as human food, Desi chickpeas are decorticated, which involves adjusting the moisture level of the seeds so the thick seed coats can be removed. Decorticated Desi chickpeas are used in East Asian processed products as well as South Asian cuisines. 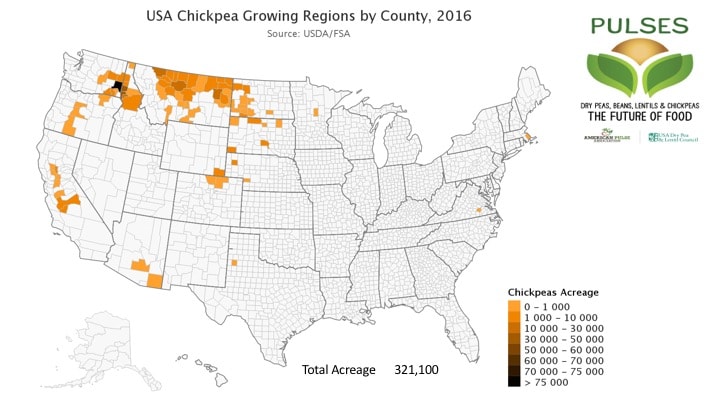