For lentils, the seeding depth should be 1.2 inches to 3 inches. Proper packing after seeding is very important to make the ground smooth and even for harvest, and it also helps prevent moisture loss. While tolerant to frost, lentil seedlings are very sensitive to wind damage. In such cases, new lentil seedlings will typically emerge from nodes beneath the surface.

Performing well in a variety of seedbeds, lentils are often seeded directly into grain residue or standing stubble if residues are insufficient to protect the soil surface. They are typically grown following winter wheat or spring barley.

Usually sown in late April or early May, lentils are most successful when soil temperatures are above 40 ° Fahrenheit (4 ° Celsius). In North America, lentils are planted in early spring and harvested in late summer. By seeding early, farmers are able to increase the height and size of the plant at first bloom. Lentils planted after April typically result in a lower crop quality and smaller seed yields.

Lentils are drilled in rows six to seven inches apart. The crop is adapted to grow during the cool season and in most of the production region lentils rely on stored soil moisture for a large part of their growth cycle.

Lentils are self-pollinating, as with other legumes, lentils start flowering after a specific number of nodes have been reached and continue until drought or nitrogen deficiency ends flowering. Maturity is reached about 100 days after emergence.

No drying is necessary, as the crop naturally dries in the field. All varieties are harvested in August and September. Lentils are cut and swathed into windrows approximately one week before harvesting to dry down the weeds and the lentils in instances of uneven crop maturity or heavy weed infestation. Swathing improves moisture uniformity of the lentil seed and reduces the amount of seed discoloration.

Swathing occurs when about 30 percent of the lowermost pods turn tan and their seeds rattle. Doing so under conditions of higher humidity may reduce shattering. Lentils can also be straight-cut (i.e., meaning one-pass with the same implement cuts and harvests the seed from the pods).

Swathers or straight-cut combines are best equipped with a flex header, or a pick-up reel and vine lifters, since lentil plants tend to lay quite at on the ground at harvest.

Because dry seed is prone to chipping and peeling during threshing, producers try to thresh at about 18 percent moisture and use aeration to dry the sample to 14 percent for safe storage.

Harvested lentils are shipped back to the buyer from the farm and then shipped to market or further processed per specifications of the buyer. Processing can entail hulling and splitting of the lentil before shipping. As a food, lentils can be stored indefinitely in a cool, dry place without losing nutritional value, taste, or freshness.

Disease pressure limits the crop rotation for lentils to once every three to four years.

Nearly 90 percent of the lentil crop in the U.S. is exported, although domestic consumption is on the rise. Export markets include Asia, the Middle East, Latin America, Europe, and Africa. Recent niche markets for small Spanish brown lentils (Pardina variety, grown for sale to Spain) and red lentils (Crimson variety, grown for sale to the Asian market) have provided greater profitability than the traditional large yellow cotyledon (Brewer variety) market. An increasing number of acres in the U.S. are being seeded with specialty lentils like the Pardina and Crimson. 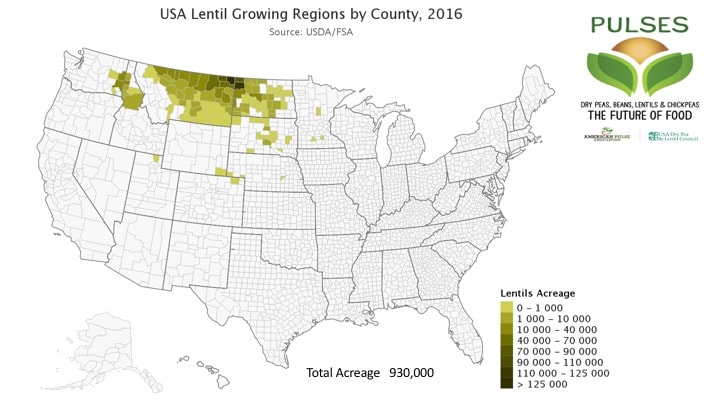